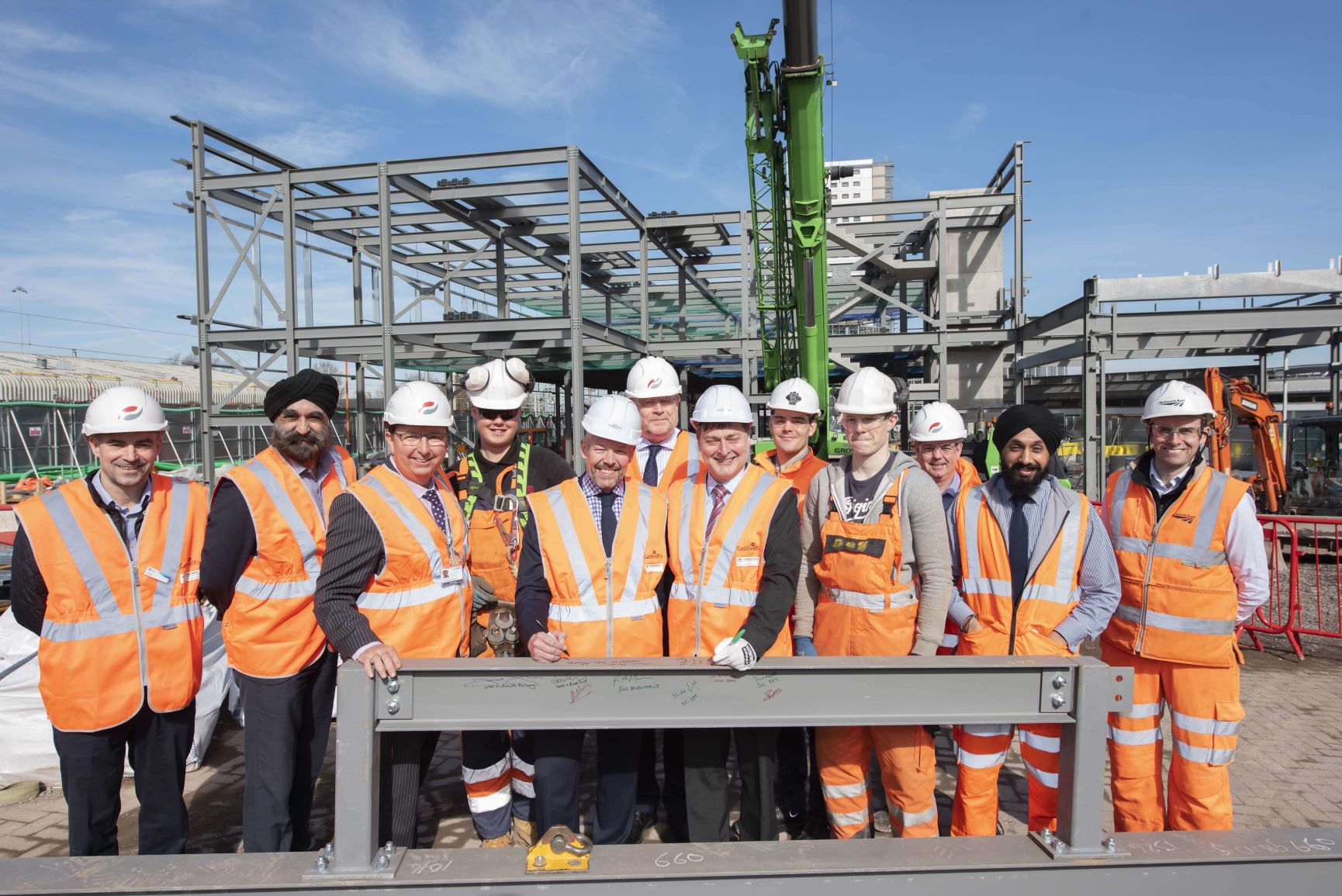 The steel framework for phase one of City of Wolverhampton’s new railway station building is close to completion.

Contractors Galliford Try finished laying the foundations in February, following the demolition of the former British Transport Police building, and a small section of the current station building next to Platform 1.

Once the remaining tonnes of steel framework are installed, work will begin on lifting in floor slabs, laying the block work for the external walls, cladding the building and putting the roof on to make it watertight.

It is all part of delivering a £150 million transport hub to provide an attractive commercial gateway to those entering the city by national rail, bus or tram.

As there will be no changes to the platform areas as part of the scheme, this has allowed it to be cleverly designed in two phases to ensure train services from City of Wolverhampton continue to operate as normal throughout.

The first section of the new station building is expected to become operational to customers in autumn 2019, when phase 2 of the programme – bringing down the remainder of the current station building and completing the new build – will also start.

The new state-of-the-art railway station building to serve the city will be fully open in summer 2020.

Councillor John Reynolds, Cabinet Member for City Economy, said: “The steel framework of the new Railway Station building is already sitting proudly on the city’s skyline and these are exciting times for regeneration in the City of Wolverhampton.

“There is more than £3.7 billion of investment on site or in the pipeline across the city, and the railway station development is a big part of how we are re-imagining and re-inventing our city centre.

“We want great connectivity to get people here; a first-class station to welcome visitors to our city; great public spaces that encourage people to linger longer; great new city centre homes that bring new customers to our businesses; a great leisure and sporting offer that brings fans from far and wide; a vibrant public events programme and outstanding arts and culture offer enticing new audiences and visitors; and finally, a thriving commercial district with well-paid jobs and executives who spend time and money in the city centre.”

Malcolm Holmes, director of rail at Transport for West Midlands (TfWM), which is part of the West Midlands Combined Authority (WMCA), added: “Seeing the steel work go up is a symbol of the on-going regeneration of Wolverhampton which is clearly a city on the up.

“Not only will the new station provide an impressive gateway but with the Metro extension stopping right outside will also provide a seamless connection to trams and the bus station. It will, of course, also offer a fast connection to the region’s two HS2 high speed rail stations from 2026.”

Francis Thomas, head of corporate affairs for West Midlands Railway, said: “Rail travel has never been more popular, with passenger numbers continuing to rise across the West Midlands. Wolverhampton’s new station and interchange will be a significant part of catering for this continued growth, with improved connectivity between different modes of public transport in the city.

“From May, rail passengers at Wolverhampton will benefit from new direct services to Birmingham Airport and London Euston, as well as trains operating earlier and later throughout the week. We are also introducing an enhanced Sunday timetable between Shrewsbury and Birmingham. These improvements are just a part of our £1bn investment into our services, with further improvements to be introduced from 2021.”

Rob Mason, Development Director, Ion, said: “Following the completion of the ground works, it is great to see that the construction of the steel frame has moved on so quickly. People can now get a real impression of how the new station will look.”

Mike Evanson, project manager for Network Rail added: “The new Wolverhampton station will provide a much-improved gateway to the city and give local people and visitors a better start and end to their journeys. We are committed to working with all our partners to make the railway better so it continues to meet the ever-increasing demands and expectations placed on it by passengers.”