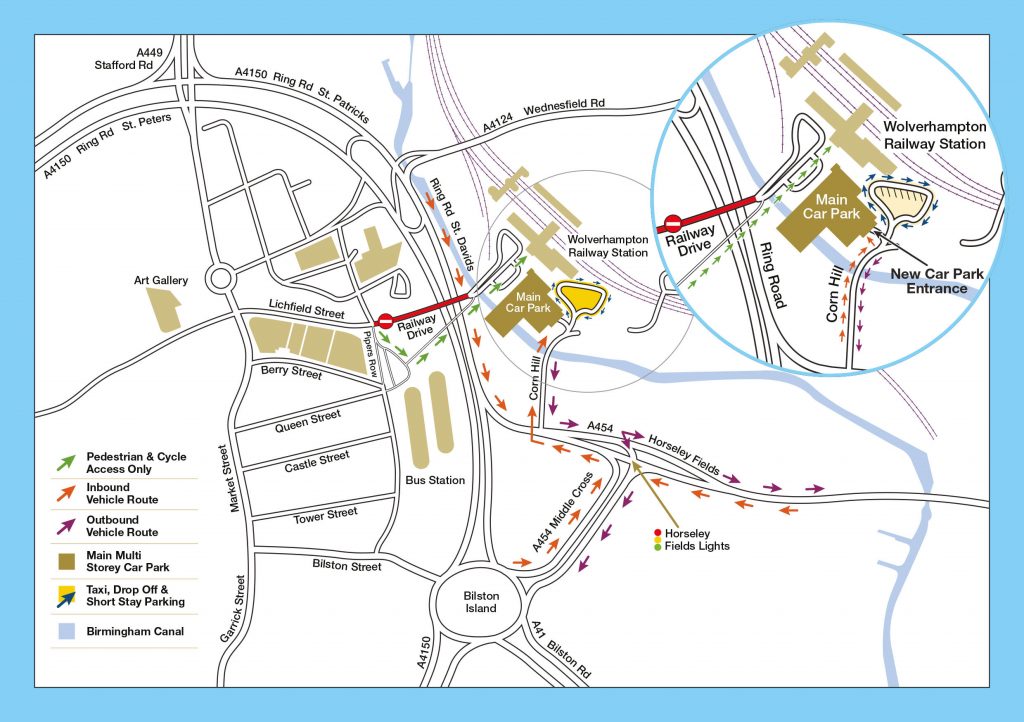 The way vehicles will access City of Wolverhampton Railway Station will change on Sunday, January 8 as part of the city’s £132 million Interchange improvements.

This coincides with the switch to a new entrance for the multi-storey car park, which will open for the first time on the same day, after being extended and refurbished on schedule.

The capacity will increase from 450 to more than 800 long stay parking spaces.

From January 8, there will no longer be any access to Railway Drive for vehicles. Pedestrians and cyclists should use the access route off Pipers Row. Cyclists will have to walk over the bridge.

The access changes are the first phase of a new-look station, with works due to begin early next year on demolishing the existing station building and replacing it with a new one.

The new station building will benefit from an enhanced Birmingham New Street-style ticket office, larger passenger concourse, ample ticket barriers to ease flow onto and off platforms, and much improved retail and café facilities.

The overall Interchange project will eventually also see a Metro line extension running down Railway Drive to a new stop at the station.

“The multi-storey car park is on schedule and there is a genuine excitement about work starting on the new state-of-the-art railway station building early next year.

“Meanwhile, I would urge anyone using the station to make themselves familiar with the new access arrangements.

“Ultimately, as well as encouraging more investment and boosting prosperity in the city, the Interchange will become the gateway to the city for people arriving off the national rail network, by bus or Metro.”

Steve Parry, Managing Director of Neptune Development, added: “Each completed phase of works becomes a defining moment in the process of delivering the scheme to the city. The successful completion of the car park allows us the opportunity to begin the build on Wolverhampton’s highly anticipated railway station in early 2017.

“In turn, the completion of the station will free the land for the next phase of commercial development. The design competition for this phase has recently launched in partnership with City of Wolverhampton Council, and we are delighted that we have already seen interest from world class architects and designers. This is testament to the strength of the scheme.”

Dave Whitehouse, Virgin Trains Interchange Project Manager Wolverhampton, said: “The opening of the new extended multi-storey car park is the first of a number of benefits our customers will start to see from 2017 onwards.

“It is an exciting time and we’ll be working closely with all our stakeholders to ensure we get timely information out to our customers to ensure they take full advantage of what will represent a step change in their experience of using the station.”

Travelling from Stafford Road (A449) direction:

Travelling from Wednesfield Road (A4124) direction:

Travelling from Willenhall Road (A454) direction:

Follow A454 into city centre, straight on at the Horseley Fields lights and right onto Corn Hill.

Take the A454 Middle Cross exit, left at the Horseley Fields (A454) lights and right onto Corn Hill.

We are an urban regeneration specialists who develop cityscapes cleverly and sympathetically. As successful with heritage and listed buildings restorations as with new builds, we have the experience, knowledge and capacity to deliver large development schemes and sustain lasting successful partnerships.